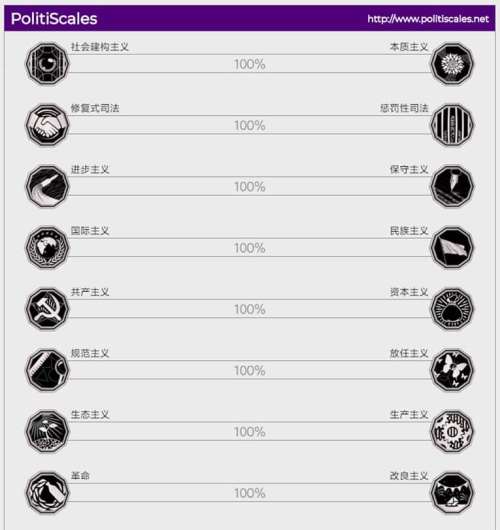 PolitiScale is a political test using 8 ideological values to help you know approximately where you belong to in the political field.

Why are the people how they are? This axis allows you to situate yourself between two opposite poles which answer this question.

The constructivists consider that people build themselves from their environment (notably social) and that the caracteristics that make them who they are, are acquired.

On the contrary, the essentialists consider that an individual is by nature how he/she is and that his/her caracteristics which make this person who she/he is, are innate.

The ones in favor of the rehabilitative justice consider that the role of justice is to put the condemned on the “right path” again by making them understand why they should not do what they did and why they were condemned and by accompanying them all along the process.

Converesly the ones infavor of the punitive justice consider that the role of justice is dissuasive, both for the condemned (to avoid recidivism) and for the rest of the society (by making them examples not to follow).

The progressists try to build social progress, make a better society without caring about traditions. They often consider the present as better than the past and that it is necessary to keep on this path.

On the contrary the conservatives want to keep the status quo and even to reinsert some values already considered as disapeared or disapearing. Traditions, among those the religious heritage, are put forward as a source of wisdom.

internationalism is a set of different ides which have for common point to stop making a hierarchy between contries and their inhabitants and to promote as much as possible their cooperation. Pushed to its maximum the final objective is the abolitions of borders.

On the other hand, nationalism is a set of heterogeneous ideas which, when applied, favour one country and its citizens over foreigners, it also justifies the idea that each people has a nation.

Communism is a vast political doctrine. In this test a majority for communism silmply signifies that you are for a public property of the means of production.

Capitalism is as well an ambivalent concept. In this test a majority for capitalism silmply signifies that you are for a private property of the means of production.

Regulationnism or interventionism is an idea in which the economical activity should be regulated for the commun interst. It can be through legislation, planification, subventions, a variable taxation...

On the contrary, the laissez-faire is the ideas in which the economical activity should not be regulated because it would in itself correspond to the commun interest. It can be through a weak legislation, few or no subventions, a fixed taxation and often weak or even the complete suppression of the role of the state in the economy.

Ecologie in politics privileges the protection of the environment by limiting as much as possible the impact of human activities on the biodiversity even if it implies to limit the these human activities by modifying more or less radically our current way of life.

Productivism privileges human needs notably by supporting the increase of the production or the use of methods that have an incertain impact on the environment.

Revolutionaries have a tendency to privilege direct action, often in the margin of legality, to reach their goal: replace the current political organisation for totally different one.

Reformists have a tendency to privilege legal action to reach their goal: reform the political organisation step by step. This can be done through the institutions, via elections, authorized demonstrations, petitions...